The Story Behind The Houston Rodeo's New 'Boot Row'

The Story Behind The Houston Rodeo's New 'Boot Row' - While there are horses, goats, and cows at Rodeo Houston, the 21-day-long affair has so much more to offer - like art. 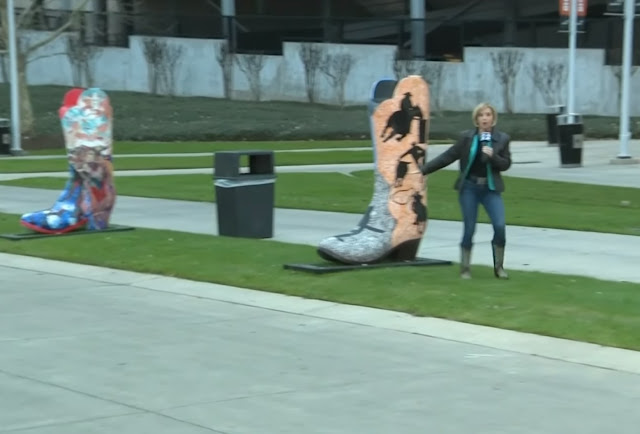 HOUSTON - While there are horses, goats and cows at Rodeo Houston, the 21-day-long affair has so tons more to provide - like art.

Fort Bend County artist Dusti Joyner says the rodeo gave her the self-assurance to make her ardor her profession. This year, she's pouring her passion again into the rodeo.

You can see one of Joyner's most recent works on your way into NRG Park on what's known as Boot Row. It's a walkway lined with 10, 6-foot tall boots. Dusti was chosen as one of six artists to paint one of the massive boots.

"When I got the boot, it was a plain, white boot. And they just said, 'Go for it! Make your plan happen,' "Joyner explained.

She painted the boot in her storage every day from November to January, simply toes from one of her very first paintings ever.

"I did this the summer season before fifth grade," Joyner said, displaying a painting she entered into the Houston Livestock Show and Rodeo's college art opposition in 1993. She received a fantastic show. "And from that day on, I was once type of like, 'Oh, I may be ok at this.' And it is how I began art."

Fast ahead 26 years to Joyner's ultra-modern canvas: a boot. Bluebonnets made of thick acrylic pop off of the boot, a texturing technique Joyner uses to add dimension.

"As you walk around and as light hits the paintings different, that each and every view is different. Every day is different," Joyner stated of the 3D impact of the texturing.

She needs her artwork to inspire the identical feeling she received when she won first-rate in exhibit all these years ago.

"I hope that some little children come up and see this boot and they're like 'Oh, I favor to do that.' And I hope it encourages different human beings to do art and to get involved," she said.

When you convey your little ones to the rodeo, quit via and take a appear at Boot Row. Joyner painted a tiny ladybug she named Loretta on her boot, hoping youngsters will end and take a minute to try and find it.